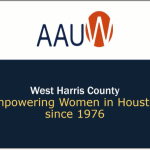 Please note there is a slight change in our schedule for the February meeting. Our speaker will arrive at 11:00 a.m. to give her presentation. The branch will meet from 10:00 a.m. to 11:00 a.m. to conduct branch business and enjoy social time.

As February 2023 marks the one-year anniversary of the war in Ukraine, we have invited Dr. Irene Guenther to come and give background into the history of Ukraine and the events that led up to the war that continues to this day.

Dr. Guenther specializes in 20th century American and European history. She received her doctorate from The University of Texas in 2001. Her teaching interests include genocide and human rights, the construction of “race” and the consequences of systemic racism in the United States, Nazi cultural policies, and comparative Second World War home fronts. Dr. Guenther has published on the Nazi takeover of the German-Jewish fashion industry; the contested politics of women’s clothing in the four occupied zones of Germany after World War II; magical realism from 1920s Germany to 1940s Latin America; and the anti-war artists of the First World War. Her first book, “Nazi ‘Chic’? Fashioning Women in the Third Reich,” won the Costume Society of America’s Millia Davenport Publication Award for best fashion history book of the year and the Sierra Prize, given by the Western Association of Women Historians. Her second book, “Postcards from the Trenches: A German Soldier’s Testimony of the Great War,” was published in late 2018 and was accompanied by a centennial exhibition of WWI soldiers’ art.

Ever since working on 5 Star Recognition for our branch last year, I have been very curious as to what was involved regarding becoming a Legacy Circle contributor. Legacy Circle has come up again in the next generation of 5 Star. My quest was to find the easiest way to set up a Legacy Circle bequest and then encourage other branch members to look into doing the same thing.  Legacy Circle funds promote equity and benefit women and girls in the future.

My first step was to check out AAUW National’s website and then contact a representative of Legacy Circle. I did not want to set up a trust, change my will, or affect any other retirement programs I already had in place. I found out all I had to do was set up a savings account at my bank naming AAUW as the Paid-on Death (POD) beneficiary.  You don’t need to open the account with thousands of dollars, a few hundred will do! Most banks want a minimum of $200.00 to open an account. Then, over time, you can add funds as you wish. Even after setting up the account, if you need to withdraw any money in the future, you can do that!  Not my intention, but good to know I have that flexibility. Once you have opened the account, you fill out a simple form called Legacy Circle Enrollment Form and forward it to AAUW National.  That form can be found on the national website.  AAUW Leave a Legacy

If anyone would like to know more, feel free to contact me.  I want to encourage other WHC members to participate in Legacy Circle now and in the years to come. Please send Becky French (bfrench1@flash.net), Corresponding Secretary, any news about our members they give you permission to share.

This year we are sending digital birthday cards to all members for whom we have dates, so if you’ve had a birthday since mid-July, please check your email inbox for a card. We hope you enjoy them.

To ensure that you do not miss any communications from the Branch, please send updates or corrections to your contact information to Mary Andersen
@  AAUW.Mary.Andersen@gmail.com